On July 10, at the Tencent Forum of the World Artificial Intelligence Conference, Jason Si, the Vice President of Tencent Group and the Dean of Tencent Research Institute, officially released the Tencent AI White Paper: Massive Intelligence.

The following is the full text of Jason Si's speech:

Good afternoon to all of you, online and offline audiences! It is my honor to participate in the World Artificial Intelligence Conference. The sudden outbreak of coronavirus during the first half of 2020 has brought unprecedented challenges to global economic and social development on the one hand, and on the other hand, the pandemic has become a touchstone of digital technology as the whole society is forced to conduct a trial run of online life under the pandemic. This condition is very difficult to create artificially which accelerates the new digital normal represented by the digital economy including artificial intelligence. To meet you today in this way is partly an indication that we have survived through this test.

The next decade can be said to be an important window period for global socio-economic reconstruction and will also bring great opportunities for “Massive Intelligence” in leading China's economic development. With the background situation of the pandemic, the recovery of the overall economy and the long-term development is the focus of the next phase. This has opened a new window for our AI to find more application scenarios and application space. We believe that a world of "massive intelligence" will arrive acceleratingly. The term "massive" has two meanings.

First, it means massive technologies and capabilities. Artificial intelligence is increasingly becoming a general-purpose technology, an infrastructure like water and electricity, facilitating digital upgrading and accelerating change in industries.

Second, it means massive applications. Industrial, medical, urban management and other fields are all being associated with AI, and AI can be seen in every aspect. Artificial intelligence is becoming widespread and beneficial to the public.

The core of "Massive Intelligence" is the new AI infrastructure in the middle layer. Just two days ago, during his visit in Guizhou, Premier Li Keqiang re-emphasized the new infrastructure. Also, he went to Tencent Seven Star Data Center, encouraged us to dig out the diamond mine of data. AI as new infrastructure is a trinity intelligent middle stage of new computing power, new algorithms and data new elements which provide support for voice, image vision, knowledge graph and many other AI capabilities, thus lower the barrier of entry for a large number of small- and medium-sized enterprises to enter intelligent times.

On top of the new AI infrastructure is the “Intelligence+"part, where is the main battlefield AI can be effective, including automated driving, AI+medical, AI+education, etc. The bottom layer still needs the strong support of the smart base, which not only includes new connections which can generate massive data such as 5G and IoT to generate but also needs complete safety control, such as relevant laws, regulations and ethical norms, so that AI can be knowable, controllable, usable and reliable.

Overall, our country's AI is already in the global first echelon, which is inseparable from the strong support of national policies. Taking the State Council's official inclusion of AI as one of the key tasks of"Internet+" in 2015 as a starting point, it can now be roughly divided into four stages: among them, the second stage is emblematic, the China’s 2017 Government Work Report included “Artificial Intelligence” for the first time. When the Internet was written into the Government's Work Report, the U.S. Internet was already in full swing, and the country was keen to elevate it to the level of a national strategy in the early days of AI development. I In July of that year, the State Council released the "Development Plans of the New Generation of Artificial Intelligence", which was an overall plan and guide for AI development towards 2030. The third stage is when AI begins to integrate deeply with the real economy. We believe that the fourth stage will start this year, and AI, as a new infrastructure, will play a more important role in promoting digital transformation, intelligent upgrading, and integration of innovation. It can be said that this has pressed the acceleration button again for the arrival of "massive intelligence".

Thanks to the country's increasing clearness of industrial policy, artificial intelligence also came out of the concept of speculation, the investors’ cognition of artificial intelligence began to return to a rational stage. We can see that investment in AI has shifted from simply chasing hotspots to paying more attention to core technology and application potential. Some underlying technology startups, as well as programs related to the strong landing of medical, education, intelligent networked cars, and other entrepreneurial projects have gained more favor.

“Massive intelligence”, if there is "intelligence", the intelligence needs to be efficient, but also need to be reliable. This"intelligence" cannot be separated from the support of technology. According to statistics, between 2010 and 2020, the computational complexity of artificial intelligence is multiplying at a rate of ten times per year, and it is on this basis that the wave of AI development climaxes. Vision technology is the eyes of the computer, and this piece of technology is now very mature, from focusing only on accuracy to an increasing focus on safety and reliability. Voice technology is the ears and mouth of the computer, opening up important new entrances to human-machine interaction, and communication between humans and machines has become increasingly natural in recent years. This year's Children's Day, we launched a virtual singer, "Ai Ling", who sang songs with Wang Junkai and children from Xiongan Primary School. Ai Ling not only have the voice which closes to a real person but also can sing with emotion like a human being. Natural language understanding is the jewel in the crown of artificial intelligence. In recent years, AI Lab has achieved global firsts in many international competitions, and WeChat AI has won the champion of the International Dialogue System Technology Challenge twice.

The pandemic is a social experiment of digital life that the whole population is forced to participate in, which has become a touchstone of AI, from the completeness of infrastructure and the flowability of data to rapid response capability is a national digital technology examination. In this social experiment, AI has played an active role in pandemic prevention and control, disease diagnosis and treatment, urban governance and the resumption of work. I believe that each of us all has a personal experience and thoughts over this, and I would like to expand a little below:

For the healthcare perspective, AI helped our doctors to save a lot of time in the diagnostic process. Especially during the treatment for the coronavirus pandemic, the number of tests per patient for every five days on average is very large, with the intervention of image recognition technology makes the whole diagnosing time reduced to one to two minutes, the fastest speed is two seconds for reading an x-ray. If AI technology can finish reading all the x-rays of lung lesions, if another atypical virus appears in the future, it will be able to issue an early warning, thus there will be a lot of application scenarios in the future in medical prevention and control.

In addition to that, during our business trips within China, the health code has become a travel essential. Europe and the United States have gone to another decentralized route, allowing people to trace the source of the pandemic relatively freely, and the application of technology in different institutional contexts presents different characteristics.

As another example, in order to help communities to prevent the spread of the virus and avoid cross-infection, Tencent has launched anti-virus functions such as health declaration, people and vehicle management, body temperature screening, and intelligent isolation, which have landed in many communities across the country. In the early stage of the pandemic, TencentYoutu laboratory’s vehicles will be able to do automatic identification and registration of external license plate, prompt for Hubei license plate vehicles and process white lists for vehicles with Hubei plate but haven’t been to Hubei recently.Based on the Tencent Youtu AI recognition technology, the platform is also able to promptly find people who are not wearing masks, and statistics on the wearing of masks by people in the community, to help community residents manage and reduce the risk of virus transmission. These seemingly small bits and pieces, but contains a large number of details of urban governance, Tencentlast year also proposed a blueprint for the development of WeCity's future cities, which has a lot of application space.

The "new online economy", or "online new economy", or the "unmanned-economy" and “contactless economy” was first tried during the pandemic and they are all special attempts to accelerate and even leapfrog in these areas under the pandemic. Previously, when we did unmanned retail, it was simply to do "unmanned stores" for the sake of"unmanned stores". During the pandemic, delivery to the last kilometer, even using unmanned vehicles to do the sending for the last kilometer, has become a must, had to do. During the pandemic, there was amulti-fold increase in the number of small program fresh shops, which is also an example. In the past, there was always a concern about the safety of fresh-commerce, but this had to be done during the pandemic phase. Once you experience this convenience and confirm its safety, you may not give it up. These bring promising changes to our future.

Likewise, our company's Chief Exploration Officer, CXO DavidWallerstein, has been advocating FEW (Food, Energy, Water), how to feed 10billion people on the earth with the current resources. Obviously, with our current technology, it is difficult for the existing land resources to support10 billion people on earth. In such a context, AI agriculture has now slowly come out from the laboratory, Tencent's AI Lab has just done some experiments with the Liaoning province, launched two phases of planting pilot projects. Compared with the unreconstructed control group, the experimental group each improved several thousand dollars profits per acre per season. In the service industry, the pandemic has spawned a contactless economy, with a surge in demand for contactless services in unmanned retail, unattended, logistics, and transportation.

We see that AI is bringing a new revolution in the human-machine collaborative relationship, and although some job types will be replaced in the short term or even structural unemployment, in the long term, the ultimate goal of AI is never to replace humans but to free people from heavy, repetitive work and solve more valuable problems. In this new collaboration, we believe that many industries will lead to the "no-people economy", but “no people” must be "for more people".

Finally, to conclude today's sharing, I would like to use a quote from Lao Tzu: "The path is wide, and it is everywhere”. In the future, artificial intelligence will be fully penetrated into our production and life, become omnipresent. As Tencent COO Ren Yuxin mentioned in his speech yesterday, after this pandemic, China will no longer have purely traditional industries, every industry will more or less start the process of digitalization, networking and intelligentization. The same holds true for artificial intelligence. In the future, every industry will integrate AI to a greater or lesser extent. When we no longer emphasize the concept of AI itself, when we don't need to hold AI conferences to discuss landing scenarios and cases, that's the time when AI will be everywhere. 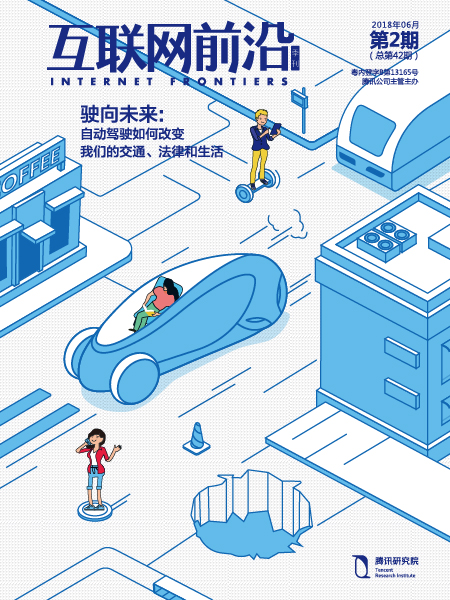